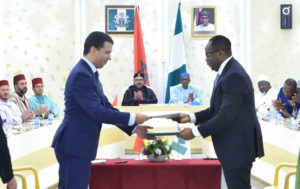 Cooperation relations between Morocco and Nigeria which have been hibernating for many years are getting off to a flying start with the historic visit King Mohammed VI is paying to Nigeria.
As is the case whenever the Moroccan monarch makes trips to African countries, the Royal visit highlighted by the signing of some 16 agreements, including two deals providing for the setting up of mega projects in the African country.
On Saturday, King Mohammed VI and his host President Muhammadu Buhari presided over in Abuja the launch ceremony of a project to construct a regional gas pipeline which will link gas-rich Nigeria to Morocco going through several other west African countries and stretching up towards Europe.
A statement read out during the ceremony pointed out that following the talks the two heads of state held on the sidelines of the COP22 in Marrakesh in November and in Abuja during the King’s current visit, Morocco and Nigeria agreed to study and take concrete measures for the construction of a regional gas pipeline which will link Nigeria and several other west African countries to Morocco.
“As a major project meant to boost regional economic integration, the pipeline will be designed with the participation of all concerned parties with the aim of speeding up electrification projects in the whole region, serving as a basis to set up a competitive regional market for electricity, likely to be connected to the European energy market, and to develop integrated industrial hubs in the sub-region in sectors such as industry, food-processing and fertilizers,” explained the statement, relayed by MAP news agency.
According to the statement, the ultimate goal is to draw foreign capital, improve the competitiveness of exports and spur local processing of natural resources to make them available for national and international markets, in addition to creating business opportunities for manufacturers and investors.
This south-south platform will step up structural transformation of the region’s national economies, put all the region on the path of a stronger growth, the statement said, adding that the two heads of state agreed to set up a joint coordination body tasked with supervising this large-scale project.
In a government video posted on Twitter, the Nigerian Foreign Minister said the pipeline would “go along the coast from West Africa — Nigeria — all the way up to Morocco and into Europe eventually.”
“That’s a very big and important project for us,” Onyeama stated.

On Friday, the two heads of state presided over the signing ceremony of an agreement to build a fertilizers plant in Nigeria, giving thus substance to a win-win partnership between the two countries.
The new plant will be built by OCP, Morocco’s state-owned phosphates company, and will benefit the whole agricultural value chain in Nigeria, making fertilizers available for farmers at competitive prices.
The project is part of Nigeria’s endeavors to diversify its economy by fostering the agricultural sector as the country was severely battered by the fall of oil prices.
The two countries signed 14 other agreements providing for developing industrial clusters in the sub-region in a variety of sectors.