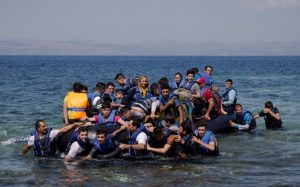 A research conducted to identify motives behind option for migration has revealed that 45 per cent of youth in the North African country are eager to try the dangerous Mediterranean crossing, report say.
High hopes and expected outcome of the 2011 revolution never materialise. Tunisian youth have been disillusioned. They have lost hope in the country despite international pledges to help authorities improve the economy and the social economic situation of hundreds thousands of jobless youth.
The research jointly conducted by Tunisia’s Tunisian Forum for Economic and Social Rights (FTDES) and Luxemburg based “Rosa Luxemburg Stiftung” (RLS) found out that 81 per cent of 1,200 youth interrogated are poised to cross the Mediterranean.
The research titled “Youth and migration in Tunisia: Study of Stereotype, practices and expectations” targeted youth in six governorates, namely Tunis, Le Kef, Gafsa, Kasserine, Médenine, Mahdia.
For Romdhane Ben Amo, Chief of communication at FTDES, Tunisia’s model of development is to be blamed.
“We believed that approaches adopted by successive governments in tackling the issue of clandestine migration were able propose alternative solutions aside from the agreements signed with the European Union, but we witnessed no improvement in the handling of economic and social social situation of regions affected by the clandestine migration,” he told French AFP in an interview.
The study carried out in December 2015 points that illegal migration has gone up. 22 to 25 thousand young Tunisians have illegally left country since 2011.
Radhouane Ayara, secretary of State in charge of migration on other hand scaled down the figure to 800, over the past two years. She argued that the number has been reducing thanks to the collaboration with neighbouring countries.
21 per cent of youth interviewed in the research claimed that they are eager to join waves of illegal boats. 15 per cent of also say there are in contact with smugglers.
Tunisia has also been facing a rise in radicalism. Thousands of country’s citizens, mostly youth have travelled conflict zones where they have been fighting for terrorist organisation, the like of the Islamic State group.