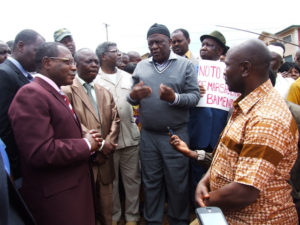 Rights watchdog, Amnesty International, on Sunday urged authorities in Cameroon to investigate the use of excessive and unnecessary force that led to the death of between two and four people during a protest in the north western city of Bamenda.

At least two people were killed in clashes between police and protesters from the English-speaking minority in the country’s northwest on Thursday, state television had reported.

The North West and South West provinces, Cameroon’s only English-speaking areas, have been witnessing protests in recent days with people calling for an end to the use of French and perceived disenfranchisement.

Some groups have been calling for a return to a federal state system. Others have called for the breakaway of the North West and South West provinces and the restoration of the so-called “Southern Cameroons” or Ambazonia, which was under British mandate during the colonization era.

According to Amnesty International, excessive and unnecessary force was used in quelling the protests.

“Authorities in Cameroon must shed light on the circumstances of these killings and injuries by immediately conducting thorough, impartial and effective investigations. Those reasonably suspected of criminal responsibility for these deaths must be brought to justice,” said Ilaria Allegrozzi, Amnesty International’s Central Africa Researcher.

“We call on the Cameroonian authorities to refrain from the use of unlawful force in their response to the protests. Responding to incidents of violence during protests with unnecessary or excessive force threatens to further enflame an already tense situation and could put more lives at risk,” Amnesty International added in a statement.