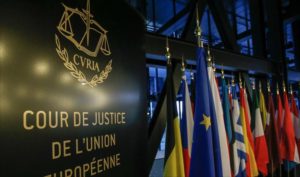 The Algeria-backed separatist Polisario front has no standing to represent the economic interests of Western Sahara or to bring proceedings on behalf of the Sahrawi population.

This is the gist of the ruling delivered on Wednesday by the Court of Justice of the European Union after examining in appeal a verdict issued in a first instance on December 2015.

The first verdict suspended the Morocco-EU farm agreement struck in 2012 on grounds that it included within its scope the Sahara provinces in Southern Morocco.

Morocco had then firmly responded to the ruling and suspended all relations with European institutions, prompting the EU foreign policy chief Federica Mogherini to fly to Rabat to reassure the Moroccan partner that the EU will challenge the court’s decision and protect the global trade pact which lowered tariffs on Moroccan agricultural exports to the bloc.

The European Union actually moved quickly to fix the problem and preserve its partnership with Morocco and lodged, at the request of all the Member State, an appeal challenging the first instance judgment.
After the European Court of Justice received the appeal, its Chief Advocate General Melchior Wathelet recommended in a legal opinion the invalidation of the December 2015 judgment on the partial annulment of the Morocco-EU agreement.

In his opinion piece, Melchior Wathelet explained that the Polisario front is not a legitimate organization and that therefore its appeal to a European court was inadmissible. The separatist front does not have the standing to represent the economic interests of the Western Sahara region, and therefore cannot claim to be the exclusive representative of the Sahara population in international relations, the Advocate General had argued and pleaded for overturning the first instance verdict.

In reaction to the new verdict, the EU foreign policy chief and the Moroccan Foreign Minister stressed in a joint statement that the two sides “took note of the ruling delivered on Wednesday by the Court of Justice of the European Union on the Agricultural Agreement between Morocco and the European Union.”

The ECJ judges ruled “inadmissible” the action for annulment against the said Agreement, introduced by the Polisario Front, the two sides said, affirming that “the EU-Morocco Agricultural Agreement remains in force.”

France on its part vowed to continue to work with its partners and the European Union to develop the quality partnership between the EU and Morocco, including in the agricultural sector.

The French Foreign Ministry said on Wednesday in a press release that Paris took note of the ECJ verdict overturning the previous ruling on the EU-Morocco agricultural agreement and that France had supported the appeal brought by the European council to challenge the annulment of the farm accord.

As to France’s standpoint on the Sahara issue, the release reiterated that its position on the Sahara remains unchanged and that it supports the search for a just, lasting and mutually acceptable solution, under the aegis of the United Nations and in accordance with the resolutions of the Security Council.

France considers the autonomy plan presented by Morocco in 2007 as “a serious and credible basis for a negotiated solution,” the press release stated further.