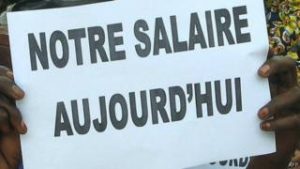 The Chadian government unveiled its intentions to amend the law on strike and industrial action in the central African nation. The move follows government workers’ strikes in the last few months.

According to the amendment proposed by the government, public servants are no longer paid on non-working days. The government said that as of January, any striking worker will not be paid.

Trade unions in the country are demanding payment of wage arrears and the non-reduction of allowances for civil servants who are opposed to this decision.

The unions have said they intend to petition against the bill, which they described as draconian. The bill must however first be approved by the Parliament then president Idriss Déby before its implementation.

As a reminder, President Déby took power in a coup 26 years ago and has survived several attempts to oust him. He won elections for the fifth time earlier this year but is under growing pressure on several fronts.

Chad produces about 120,000 barrels of oil a day and the fall in crude prices sparked a fiscal crisis for the government, which depends on petrodollars for 70 per cent of revenues. Austerity measures including cuts to student stipends have sparked street protests and civil servants’ strikes.

Chadians complain of restrictions on civil liberties and poor living and working conditions. In the UN Human Development Index for 2015, Chad comes very close to the bottom, occupying the 185th place out of 188.