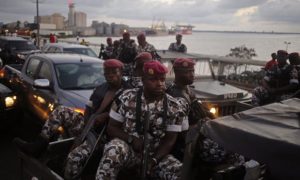 Mutinous soldiers in Côte d’Ivoire have released the country’s Defense Minister and other government officials after detaining them for about two hours in a standoff over pay in the west-African nation.

The mutiny began early on Friday when rebellious soldiers from one battalion erected barricades and seized Bouake, the country’s second largest city.

Over the following two days, soldiers at military camps in cities and towns across the country, including the commercial capital Abidjan, joined the mutiny.

Following talks between the Defense Minister and the mutineers, President Alassane Ouattara announced the deal in a televised address.

“I confirm that I have agreed to take into account the demands of the soldiers over bonuses and better working conditions,” he said, without giving details.

“I would like to say that this manner of making demands is not appropriate. It tarnishes the image of our country after all our efforts to revive the economy.”

According to the New York Times, the Ivorian military remained fractured as the government has struggled to integrate the rebels who helped install Alassane Ouattara in 2011 after his predecessor Laurent Gbagbo – now on trial at the International Criminal Court – refused to accept defeat in elections the previous year.

A similar revolt occurred in November 2014, when thousands of soldiers left their barracks to demand back pay and benefits.