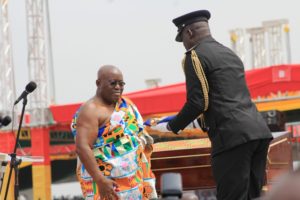 Thousands of people gathered in Accra’s Independence Square this weekend to witness the swearing-in of the newly elected president Akufo-Addo as president and Mahamudu Bawumia as vice-president of the West–African nation.

“My government will provide the vision and shine the light for farmers and entrepreneurs to thrive in the country,” Akufo-Addo, 72, said at the ceremony, promising an improved economy under his leadership.

“We will reduce taxes to recover the momentum of our economy,” said Akufo-Addo, wrapped in a traditional colourful “kente” robe. “Ghana is open for business again.”

“I shall protect the public purse by insisting on value for money,” he said. “Public service is just that: service and (is) not be seen as an opportunity for making money.”

Akufo-Addo who served as foreign minister and attorney general in the NPP government that ruled between 2001 and 2009, said Ghana had no excuses for remaining impoverished 60 years after gaining independence from Britain.

“The change can and should start now. I urge you to be citizens, not spectators; citizens, not subjects, responsible citizens building our communities and our nation. Let us work until the work is done,” he said.

The previous administration led by John Mahama was forced to seek a $933 million emergency loan from the International Monetary Fund last year, blaming the downturn on low prices for Ghana’s main exports cocoa, gold and oil.

After expanding at the fastest annual pace in Africa at 14% with the start of oil exports in 2011, Ghana’s economy was projected to slow to 3.3% growth in 2016.