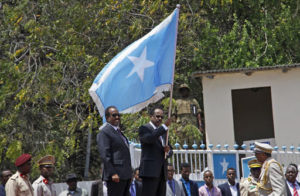 According to Captain Mohamed Hussein, at least three mortars slammed into a nearby residential area during the ceremony and killed 2 civilians.

The SITE Intelligence Group, which monitors jihadi websites, cited al-Shabaab posts on Twitter that claimed responsibility for the attack.

President Mohammed Abdullahi Farmajo was elected on February 8 near a heavily guarded hangar in Mogadishu by 275 MPs and 54 senators.

The new president brings hope to the country, which has been disintegrating since 1991, when warlords ousted Dictator Siad Barre, then plunged the nation into civil war. In the intervening years, militants took advantage of the political vacuum.

While the al Qaeda-linked al-Shabaab has been pushed out of most of its key strongholds, it continues to carry out deadly attacks in the capital, Mogadishu.

Addressing the crowd of officials and journalists, President Farmajo said, “It’s a historic day in Somalia. People in Somalia and around the world can see how smoothly we are transferring the power.”

He appealed fellow Somalis across the world to cooperate with his government’s efforts to restore peace and order to Somalia.

“In terms of security and tax collection, we need you to protect this government and we pray that Allah may save us from the conflict and the drought we are struggling with,” he said.