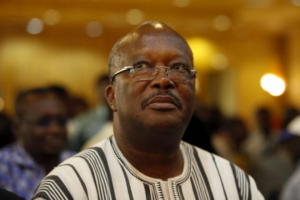 Burkina Faso President Roch Marc Christian Kabore has reshuffled his cabinet on Monday, handing over control of the defense ministry.

The president has appointed Jean Claude Bouda, previously youth minister, as minister of defense as the West-African nation battles to contain the spread of Islamist militant violence.

Kabore had held the post himself since he was elected last year.

Simon Compaore, who had served as minister of territorial administration, was named minister of state for security.

The west-African nation is struggling to stem the overflow of Islamist militancy from neighboring Mali.

A newly-formed militant group led by a combatant formerly loyal to Algeria’s Mokhtar Belmokhtar claimed to have attacked a Burkinabe military post.

Burkina Faso and Mali have recently agreed to work together to counter the growing threat of Islamic militants in West Africa by sharing intelligence and conducting joint security patrols.

In a report circulated earlier this month, U.N Secretary-General Antonio Guterres said growing insecurity in border areas between Mali, Burkina Faso and Niger, together with the impact of drug trafficking on peace efforts, demonstrated the need for regional cooperation to tackle security threats.