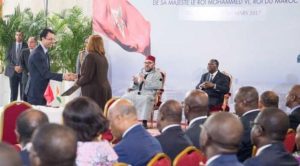 King Mohammed VI, who is on a visit to Abidjan, and President Alassane Ouattara co-chaired a ceremony during which the Moroccan-Ivorian Economic Impetus Group, created in 2015, presented the agreements.

The 14 accords cover a wide range of areas including defense, agriculture, banking and health.

Morocco’s leading bank Attijariwafa Bank (AWB) signed a Memorandum of Understanding (MoU) with Ivorian defense ministry for the funding of the “Hexagone” project; one of the projects included in the 2016-2020 military programming law.

BMCE Bank of Africa, another Moroccan giant institution, will fund a social housing project for military personnel of the Ivorian army.

Groupe Banque Centrale Populaire (GBCP) also inked a partnership agreement for the establishment of a fund earmarked for financing the construction of a highway network in Côte d’Ivoire.

Another partnership accord signed with the Ivorian health ministry paves the way for the construction of a pharmaceutical plant to produce generic drugs for local populations.

Since its reinstatement in the African Union, Morocco has already signed over 113 accords with African states; a move translating King Mohammed VI’s call for South-South win-win cooperation.