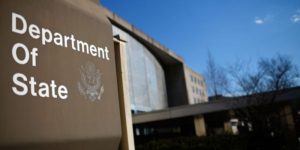 US State Department has denounced restrictions imposed by Algerian authorities on the freedom of the press, assembly and association as well as the lack of judicial independence and impartiality.

In its latest report on human rights in the world, Washington condemned the excessive use of force by Algerian police, torture, widespread corruption and lack of government transparency, saying the Algerian authorities did not take sufficient steps to investigate, prosecute, or punish public officials who committed violations.

Impunity for police and security officials remained a problem, and the government rarely provided information on actions taken against officials accused of wrongdoing, said the US report.

Last year, UN Human Rights Committee found Algeria to be in violation of article seven of the International Covenant on Civil and Political Rights, which prohibits torture and cruel, inhuman, or degrading treatment or punishment.

The decision was based on the government’s failure to contest allegations made in the case of financial consultant Chani Medjoub, who was initially arrested in 2009 in connection with a corruption case and who said that members of the Intelligence and Security Department (DRS) tortured him.

According to the US State Department report, although the law prohibits arbitrary arrest and detention, Algerian authorities sometimes used vaguely worded provisions, such as “inciting an unarmed gathering” and “insulting a government body,” to arrest and detain individuals considered to be disturbing public order or criticizing the government.

Amnesty International (AI) and other human rights organizations criticized the law prohibiting unauthorized gatherings and called for its amendment to require only notification as opposed to application for authorization.

These observers, among others, pointed to the law as a significant source of arbitrary arrests intended to suppress activist speech. Police arrested protesters in Algiers and elsewhere in the country throughout the year for violating the law against unregistered public gatherings.

International and local observers say Algerian authorities use antiterrorism laws and restrictive laws on freedom of expression and public assembly to detain political activists and outspoken critics of the government.

The Algerian government uses its control over most printing houses and large amounts of public sector advertising to exert undue influence on press outlets and to suffocate the freedom of speech, expression and press.