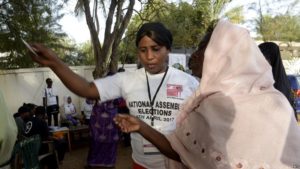 Gambia’s electoral commission chair on Friday indicated that the party of new President Adama Barrow has won a majority of seats in parliament.

More than 880,000 Gambians have voted for members of their one-chamber parliament in the first polls since Yahya Jammeh left power after more than 22 years.

Thursday’s vote outcomes assure that Barrow can move ahead with promised transitions toward greater freedoms and economic development of the tiny nation. He has pledged to carry out political, security and media reforms. The reforms include a truth and reconciliation commission to investigate abuses committed under Jammeh’s rule.

Barrow will appoint five additional members to bring the total number of MPs to 58.