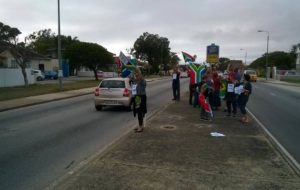 Thousands of South Africans took to the streets demanding the resignation of scandal-tainted Zuma, who for now retains the support of the ruling ANC.

Some veterans of the ANC’s armed wing, which dates back to the anti-apartheid struggle, have gathered outside the party’s headquarters in Johannesburg, British Broadcaster, BBC reported.

About 30,000 protesters marched in Johannesburg, Pretoria and other big metropolitan areas.

In a statement, the government appealed for calm and said it respects the right of South Africans to protest peacefully, a legacy of the struggle against white minority rule that ended in 1994.

Zuma, 74, has faced similar protests in the past.South Africa’s biggest trade union has called on President Zuma to quit after his cabinet reshuffle cost the country one of its investment-grade credit ratings and deepened splits within the ruling ANC.

The union, allied to Zuma’s ANC, said it no longer believed in his ability to lead, and that it wanted to restructure its alliance with the party.

However, the ANC on Wednesday rejected calls for Zuma to quit. Analysts doubted marches would shake the president.