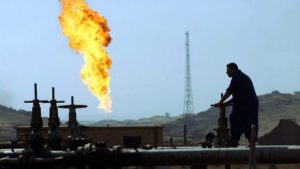 Algeria is on course of depleting its coffers as its foreign exchange reserves continue to dwindle to stand at $109 billion dollars at the end of last February, said governor of Algeria’s central bank, Mohamed Loukal.

Last June, the Prime Minister reassured journalists that whatever happens, Algeria will never let reserves go below $100 billion. But the current spending pace shows that reserves may dwindle further.

Algeria’s 2017 appropriation bill is calculated on an oil price of $50 per barrel, while the IMF estimates that Algeria needs a barrel price of $110 to maintain macro-economic balance at a moment economic analysts warn of an upcoming budget crisis if oil prices remain at the current levels of around $50 per barrel.

International think thanks have also blamed Algerian authorities for squandering its mantra during the era of expensive oil, which came to a halt in 2014. When oil prices plunged in 2014 before levelling out below $40 per barrel, Algiers was forced to drain its coffers to keep paying for its imports, pushing its budget deficit to a record high of 16.4 percent of gross domestic product in 2015.

Another worrying factor that will affect Algeria’s finances in the medium term is the decreasing export capacity of hydrocarbons due to an increasing domestic consumption by more than 50 percent when production has fallen by 25 percent. With less oil available for export, the government’s revenues have been hit hard.

In the face of such dilemma, Algeria opted for cutting subsidies and increasing taxes. These measures, however, tackle only the symptoms and do little to relieve Algeria from dependence on raw resources.

Little enthusiasm has been shown by Algerian authorities for reforming regulatory laws relating to investment promotion as the country’s infamous rule capping foreign ownership of any business operating in Algeria at 49 percent is still maintained.

The new growth model that has a vision for diversifying Algeria’s economy by 2030 away from dependence on oil and gas may seriously be compromised by the entrenched patronage networks and vested interests in the status quo at the helm of the regime, uncertainty over the successor of the current president, unstable geopolitical context, underdeveloped banking system and widespread corruption.

In the absence of genuine reforms, Algeria remains a tinderbox waiting to implode in light of the existence of a dangerous mix of economic instability, radical Islamism and growing youth unrest, which make the North African country on the brink of a new revolt.