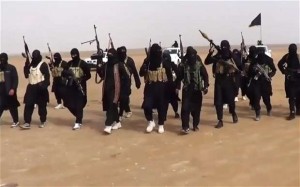 The interior ministry of Morocco announced late Wednesday the arrest of seven men in the city of Fez and Moulay Yacoub in terrorism related investigations.
The seven men were part of a terror cell operating in the two cities. Their arrest was made possible thanks to country’s Central Bureau of Judicial Investigation (BCIJ), the ministry noted.
The cell according to the ministry was active in the recruitment of would-be terrorists for the Islamic State group (IS) in Iraq and Syria. The sympathizers of the terror group are sent to the two hotbed conflict zones in view of receiving military training.
The ministry further noted that the cell was link to previous terror cell busted in past by the BCIJ. First elements of the investigation led to the seizure of some important sums of money, knives, electronic equipment as well as some military uniforms.
The leader of the cell according to security officials also sponsored the trip three Moroccan IS sympathizers in the Syria in view of getting combat techniques.
A brother of one of the arrested, has been also condemned earlier for terrorism related charges. He belonged to a dangerous busted cell which was planning terror attacks in the Kingdom and in a European country that ministry stopped short to mention.
Other members of the Fez and Moulay Yacoub cell also have siblings fighting in the ranks of IS in Iraq and Syria, ministry added.
The North African country has been placed at among top countries to attack by the global terror cell. Around 500 IS members are said present in the kingdom.
In January, the BCIJ also nabbed seven other people operating in the cities of El Jadida, Salé, El Gara, Boulaâouane and Douar Maatallah.