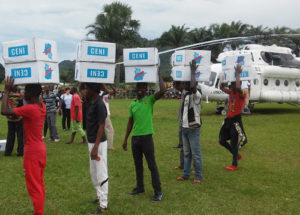 Election materials distribution has kicked-off in 15 election centres in the Democratic Republic of Congo, officials said on Wednesday.
The United Nations Mission in the central African nation (MONUSCO) has already dispatched 3,900 tonnes of election materials around the country’s 107 satellite stations.
“As I speak, a helicopter is making a final rotation between Kinshasa and Kasongo Lunda in Kwango province. This ends the MONUSCO air operation to support the ongoing revision of the electoral register,” UN Communications Coordinator in the DRC, Florence Marchal told the UN radio station Radio Okapi.
President Joseph Kabila has been in power since 2001, taking over after his slain father, Laurent Kabila. He is constitutionally bound to step down after serving two terms.
According to a December 31, 2017, political deal brokered by the Catholic Church, presidential polls had to be held this year to elect Kabila’s successor.
New Prime Minister of the Democratic Republic of Congo (DRC), Bruno Tshibala, has disclosed that he plans to organize the country’s next polls with internal resources.
The government contracted a Dutch outfit to help the electoral body compile a biometric register and to conduct the elections. Whenever elections are held it would be the first democratic transition in the war torn country.