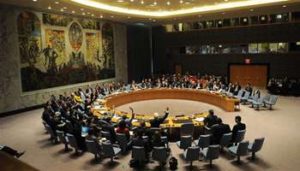 The United Nations Security Council on Friday called for the resumption of negotiations on Western Sahara, urging the parties to show political will and work in an atmosphere propitious for dialogue in order to resume these negotiations, and thus ensure implementation of previous UN resolutions on the issue.
In a resolution adopted unanimously by its fifteen members, the Security Council stresses that “realism” and the spirit of “compromise” are “essential” in order to achieve progress in the negotiations.
The Council affirms its full support for the commitment of the Secretary-General and his Personal Envoy towards a solution to the question of Western Sahara “to relaunch the negotiating process with a new dynamic and a new spirit leading to the resumption of a political process”.
In this context, the Council calls upon the parties to resume negotiations under the auspices of the Secretary-General without preconditions and in good faith, taking into account the efforts made since 2006 and subsequent developments, with a view to achieving a just, lasting and mutually acceptable political solution, reads the resolution.
The Security Council, which insists on the need to reach “a political solution” to the Sahara conflict, reiterates “its call upon the parties and the neighboring states to cooperate more fully with the United Nations and with each other and to strengthen their involvement to end the current impasse and to achieve progress towards a political solution,” the resolution states.

This call for neighboring countries’ involvement in the settlement process echoes the recommendations that the UN Secretary-General Antonio Guterres made in the report he submitted to the Security council earlier this month. In his report, Guterres urged Mauritania and especially Algeria that he mentioned several times, to cooperate fully in the endeavors seeking a solution to the Sahara conflict. Morocco’s neighbor Algeria hosts the separatist Polisario front on its territory and extends it diplomatic, military and financial support, which make of it a party to the conflict, although it claims the contrary.
The Council emphasizes the importance of the parties’ commitment to continue the process of preparation for a fifth round of negotiations, and encourages the neighboring countries to make important contributions to this process.
The United Nations opened negotiations between Morocco and the Algerian-backed Polisario separatists in 2007, after Morocco presented an autonomy plan for the Sahara that the UN Security Council deemed “serious and credible”. Several negotiation rounds were held since then, but no progress was made. The latest round took place in 2012.
The Council reaffirms, in this vein, “its commitment to assist the parties to achieve a just, lasting, and mutually acceptable political solution, and affirms that “enhanced cooperation between the member states of the Arab Maghreb Union, would contribute to stability and security in the Sahel region.”
The Council, which extends the mandate of the MINURSO until 30 April 2018, reaffirms the need for full respect of the military agreements reached with MINURSO with regard to the ceasefire and calls on the parties to adhere fully to those agreements.
The council reiterates that it takes note of the Moroccan autonomy proposal presented on 11 April 2007 to the Secretary-General and welcomes the serious and credible efforts made by Morocco to move the process forward towards resolution.
The UN body recognizes that the consolidation of the status quo is not acceptable, and notes further that progress in the negotiations is essential in order to improve the quality of life of the people of Western Sahara in all its aspects.
Morocco has welcomed the UN Security Council Resolution on the Sahara, which highlights Morocco’s efforts to settle the conflict through the autonomy initiative and calls on the other parties, notably Algeria, to uphold their responsibility in settling the dispute.
The Moroccan Foreign Ministry said in a statement released Saturday that Morocco “takes note with satisfaction of the unanimous adoption by the Security Council of its resolution 2351.”
Morocco also welcomed the fact that the MINURSO mandate was extended “within the strict framework of its current prerogatives, and clearly reaffirms the parameters of the political process as defined since 2007.”
“The resolution reiterates the regional dimension of the artificial dispute around the Moroccan Sahara and clarifies the responsibility of neighboring countries, and particularly Algeria,” the statement adds, renewing Morocco’s commitment to work towards a definitive solution within the framework of the autonomy initiative.
Following the vote, delegates of the council member states hailed the resolution as a real opportunity to revive the political process in Western Sahara and called on all parties to rise to their shared responsibility, and to refrain from actions that may undermine the ceasefire agreement.