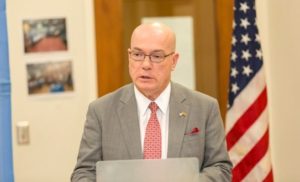 U.S. Ambassador to Ghana, Robert P. Jackson announced Thursday that President Trump administration is set to deport seven thousand Ghanaians who have abused the terms of their Visa.

“In fact about 7000 of them are currently at different stages of the deportation process. And we are not apologetic about that,” Robert P. Jackson said.

The move comes a day after the UK High Commission in the West African nation revealed that four Ghanaian MPs have breached the UK visa policies.

The four, according to the commission, have used their diplomatic passports to secure visas for persons who travelled to the UK and never returned.

In November, the United States deported 108 Ghanaian immigrants for reasons including drug-related offences, staying illegally, over-staying their visa and other crimes.

Some of the deportees were said to have served various jail terms.

In the first three months of 2016, about 350 Ghanaians had been deported from various countries around the world as a result of immigration-related issues.