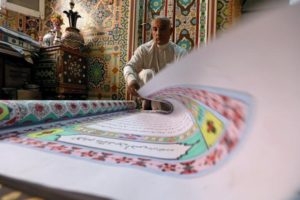 Self-educated Egyptian Sa’ad Mohammed is putting together what is on record to be the world’s largest handwritten Quran, Reuters reported on Wednesday.
Mohammed, who lives in the town of Belqina, north of Cairo, told Reuters that he spent years working on his craft – despite having no support from those around him.
Over a three-year period, Mohammed has produced a 700-meter long copy of the Quran written on paper. He displays the carefully decorated manuscript in a large wooden box with rollers at each end.
“This Koran is 700-meter long, and of course that’s a large amount in paper, and it’s very heavy, so of course it was very difficult for it to be produced in paper, but I was determined to have it produced in paper, and no other material…”, Mohammed told Reuters TV.
“I self-funded this project for the past three years – and I’m an average person. I don’t have assets or anything,” he added.
Another contender for the largest handwritten Koran was unveiled in Afghanistan in 2012. It is more than 2.2 meter long and 1.55 meter wide and contains 218 pages.
The oldest Koran in the world is officially – according to the Guinness World Records- the Holy Quran Mushaf of Othman.