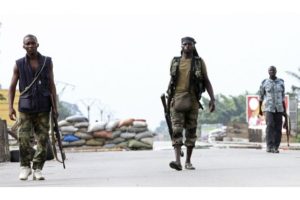 The rebellion in Bouaké, a city of half a million inhabitants, 350km north of the economic capital Abidjan, comes five months after a similar revolt, when thousands of soldiers left their barracks to demand back pay and benefits.

Unrest linked to the mutiny was then witnessed in cities across the country, including in Abidjan, where gunfire rang out at the defence ministry after soldiers entered the city’s military headquarters.

At the time, the government agreed to take into account the soldiers’ demands concerning bonus payments and improvement of living and working conditions.

West Africa’s largest economy has emerged from a decade-long political crisis as one of the continent’s rising economies.

President Ouattara has received credit for overseeing the country’s resurgence, but has struggled to reform an army still filled with rebels who helped install him in 2011 after his predecessor, Laurent Gbagbo, refused to accept his electoral defeat.