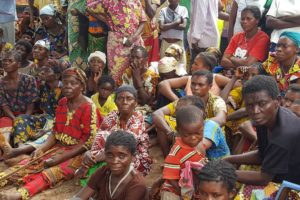 About 4,600 people flee their homes every day in the Democratic Republic of Congo as the political and humanitarian crisis deepens, the UN said on Monday.

According to the United Nations humanitarian agency OCHA, 3.7 million people were displaced within the central African nation by the end of March – more than double the 1.6 million since a brutal conflict broke out in the Kasai region in mid-2016.

“This very acute crisis in the DRC is not just expanding dramatically in terms of numbers but it’s also expanding in terms of geographical scope,” said Rein Paulsen, head of the OCHA.

“The fact that we are also now seeing an evolution of the conflict in the Kasai where inter-ethnic violence and conflict is becoming a dominant characteristic should be a deep, deep concern to all of us,” he told a news briefing.

The U.N. team has now documented 40 mass grave sites and killings of more than 400 people in Kasai.

Kasai has been since mid- 2016 shaken by violence between security forces and militias, in which around 100 people died, including two UN experts — American Michael Sharp and dual Swedish-Chilean national Zaida Catalan.