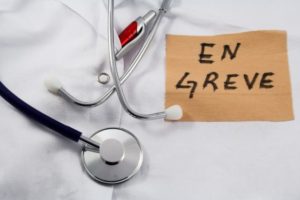 Cameroon’s public hospitals are almost at a standstill as thousands of doctors nationwide downed their tools on Monday, demanding a pay rise and better medical facilities.

The doctors union SYMEC, led by Dr. Pierre Yves Bassong, called on doctors nationwide to observe the two-day strike action, which is the second since April that left patients without critical care in hospitals across the central African nation.

The doctors are demanding a review of their salaries and bonuses, insurance allowance, speedy integration into the public service and increase in retirement age from 55 to 65 years.

The government had threatened to fire the strikers and has already transferred the leaders of the doctors union to rural communities in the country’s remote northern region.

In a Facebook live Broadcasting on Sunday night, SYMEC leaders said all appointments and consultations should be cancelled and laboratory tests and medical examinations should be suspended during the sit-in strike.

“Doctors standing up for Cameroon, we must stand with them! … It’s essential for us citizens to support doctors in this initiative for a better health system in Cameroon,” political activist Kah Walla tweeted on Sunday.

A local source confirmed to medafricatimes.com that some emergency services are still functioning in some areas and some hospitals have skeleton staffing this Monday morning.