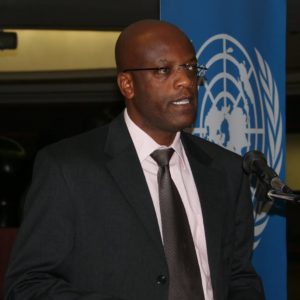 United Nations Secretary-General António Guterres has appointed Masimba Tafirenyika of Zimbabwe as Director of the UN Information Centre in Pretoria, an office that provides service to South Africa  and Tafirenyika started assuming his duties as of Monday, a press release said.
Tafirenyika was most recently Chief of the Africa Section in the United Nations Department of Public Information and Editor-in-Chief of its Africa Renewal magazine, since 2009.  Previously, he served as Officer-in-Charge of the Pretoria information centre from 2008 to 2009, and as Deputy Director from 2006 to 2008.
Tafirenyika who held several key positions at the UN since 1996 was an Associate Third World Visiting Researcher for a Georgetown University research program, run by the Centre of Concern in Washington, D.C., from 1992 to 1993.  Prior to this, he worked as the Research Coordinator for the Southern African Research and Documentation Centre in Harare, Zimbabwe, from 1985 to 1992.  He has also worked as a freelance journalist, based in Zimbabwe, writing on political and economic development issues for various publications around the world.
He has a Master of Arts degree in International Affairs from Columbia University in the United States and a Bachelor of Arts degree in Economics from the University of Zimbabwe.