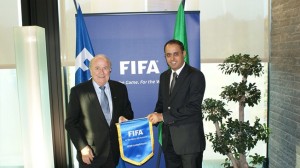 The president of the world football governing body (FIFA), Joseph S. Blatter, is expected this Wednesday in Nouakchott, first leg of a six day tour that will also take him to Guinea, Botswana and South Africa.
At his first port of call, Blatter is to confer with the president of the Mauritanian football association (FFRIM) Ahmed Ould Yahya on various areas of cooperation between the two bodies.
Football in Mauritanian has been on the decline and the country has not taken part in any major continental tournament. Facilities are also not suitable to develop the game of football countrywide.
Speaking as the new FFRIM president, Ould Yahya had said “Mauritanian football has been immersed in a serious crisis for many years.” “Football came to a halt in my country and the national team disappeared from the world ranking because it just wasn’t playing.”
During his two day visit in the country, Blatter will attend the opening of the new headquarters of a Football Academy and two artificial pitches set up with the help of the “Win in Africa” project at the Sheikha Ould Boidiya Stadium.
During his trip, Blatter will visit FIFA funded projects in these African countries and will attend the finals of the 2013 Africa Cup of Nations in South Africa.