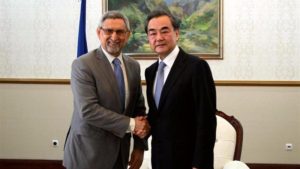 China welcomes Cape Verde to participate in the “Belt and Road Initiative”, especially the construction of a Maritime Silk Road, the Chinese official said.

According to Cape Verde’s Minister of Foreign Affairs, Luis Filipe Tavares, Cape Verde supports the Belt and Road Initiative, and is willing to take the opportunity of developing the Sao Vicente special economic zone to join the initiative.

Wang Yi has also announced other projects in the field of tourism, infrastructure and human resources development. The China-Africa Development Fund (CADF) is funding a minimum of $25 million worth of projects in the Archipelago.

The growth will be supported by foreign direct investment, domestic demand, agriculture and tourism, as well as a slight recovery in Europe, said the International Monetary Fund (IMF) in a report.