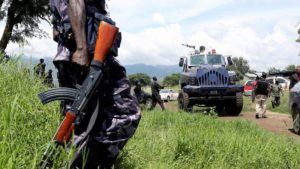 Armed attackers freed a French national and three Congolese kidnapped in March during an attack on a gold mine in eastern Democratic Republic of Congo, the Interior Ministry said in statement.

“The president of the (French) republic welcomes the news of the liberation of our compatriot kidnapped on March 1 in the east of Democratic Republic of Congo,” said a statement from the office of French President Emmanuel Macron.

The new French president praised the DRC authorities “for their mobilization and the effectiveness of their action” in obtaining the hostage’s release, the statement added.

The hostages worked for Banro, a Canadian gold mining corporation in DRC. The mine manager Crispin Mwetwedu confirmed that the subsidiary of the Canadian company has received an anonymous call demanding a ransom.

The rebel group has criticized the mining company for not giving access or jobs to young miners who had been working on the site before it took over.

Banro’s four gold mines in eastern DRC have been repeatedly targeted by armed militias, which remain active despite the official end to a regional conflict in 2003.

DRC is home to multiple militias vying for control of its mineral-rich land.