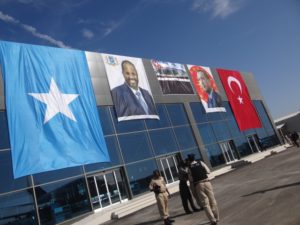 The main airport in the Somali capital, Mogadishu, has reopened to traffic on Wednesday after a US-registered passenger plane crash caused disruption of flights.

The small plane chartered by US contracting firm Bancroft crashed at a Mogadishu airport after a failure of the plane’s landing gear on Tuesday.

Passengers who were aboard the plane survived, Xinhua news agency reported.

Mogadishu airport is seen as one of the safest places in the war-torn nation that continues to battle with Al-Shabaab militants.

The country has been mired in conflict since 1991, when clan-based warlords overthrew Siad Barre and then turned on each other.

Al Shabaab, which once ruled much of Somalia, has been fighting for years to impose its strict interpretation of Islam.

Somalia’s Air Transport Minister Abdullahi Salad Omar has recently declared the airport will begin handling night flight services after the Prime Minister Hassan Ali Khaire officiated the installation of runway lighting system to enable landing and take-off of planes during the night. These will become the first night flights at Mogadishu Airport since 1991.