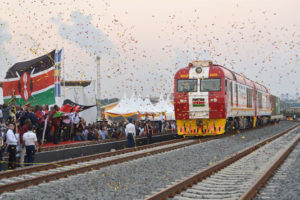 Kenya authorities on Tuesday launched a multi-billion a Chinese-backed railway with a first trip from the city of Mombasa to capital Nairobi.

In his official speech at the unveiling ceremony, President Kenyatta said the launching “is a historic moment as we begin our journey of transformation.”

Kenyatta also indicated that his government is banking on the $3.8 billion China-funded project to hasten industrial growth and cross-border trade.

According to Kenya Railways Corporation (KRC), it will cost $500 to transport a single container through the SGR cargo train, compared to $900 by road between Mombasa and Nairobi.

The newly opened railway, the country’s biggest infrastructure project since independence in 1963, is the first phase of a project to connect Kenya’s landlocked neighbors Uganda, Rwanda and South Sudan to Mombasa.

The railway replaces part of the 1,062-kilometer line known as the “lunatic express,” which was built by the British more than a century ago and linked Lake Victoria with the port city of Mombasa.