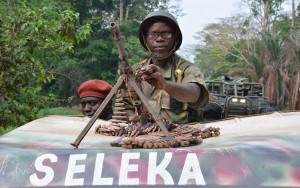 Warning that violence in the Central African Republic (CAR) is quickly escalating, the top United Nations aid official in the country Thursday urged the international community to assist the tens of thousands of newly displaced civilians, the UN said in a press release.

Speaking to representatives of UN Member States in Geneva, Najat Rochdi, the Humanitarian Coordinator and UN Resident Coordinator in the country, said the frequency and brutality of attacks in Bangassou, Bria, Alindao and other localities have reached levels not seen since August 2014.

“In the past two weeks the signs are very clear, violence in the Central African Republic has entered a new spiral of escalating conflict and the situation is quickly deteriorating,” Ms. Rochdi said.

“Over 100,000 people have been newly displaced, running for their lives, leaving everything behind,” she added.

Humanitarian actors are facing logistical and security challenges to reach the people in need, as well as funding shortages.

The UN requested nearly $400 million on behalf of the humanitarian community to meet CAR’s needs. So far, only about 25 per cent have been received, according to the Office for the Coordination of Humanitarian Affairs (OCHA), the press release said.

Without sufficient resources, the most vulnerable people will be cut off from aid “many of them will be killed, and entire areas of the country abandoned,” warned Ms. Rochdi.

Clashes between the mainly Muslim Séléka rebel coalition and anti-Balaka militia, which are mostly Christian, plunged the country of 4.5 million people into civil conflict in 2013. According to the UN, more than half the population is in dire need of assistance. Despite significant progress and successful elections, CAR has remained in the grip of instability and sporadic unrest.