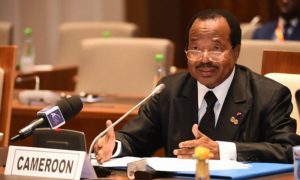 Cameroon military court in Yaounde on Wednesday maintained that Lawyer Felix Nkongho, Professor Fontem Neba as well as radio host Mancho Bibixy, who have been the main leaders in the recent demonstrations in the Anglophone regions of Cameroon will remain in custody.

The court’s presiding judge also rejected an appeal for the release of 24 other Anglophones facing charges over “acts of terrorism” and complicity to commit such acts.

The accused pleaded not guilty to charges including complicity in hostility against the homeland, secession, civil war, and campaigning for federalism.

Since November 2016, people in Cameroon’s two western English-speaking regions have joined protests against what they say is their marginalization by the French-speaking majority.

At least six protesters have been shot dead and hundreds of others arrested during the rare challenge to state authority, prompting criticism from human rights groups.

Speaking to reporters at the Yaoundé-based court, Bernard Muna, chief defense counsel for the accused, said he was disappointed at the tribunal’s decision.

The defendants are being tried under a 2014 law created to help combat militants from Nigeria-based Islamist militant group Boko Haram whose fighters regularly launch attacks in Cameroon.