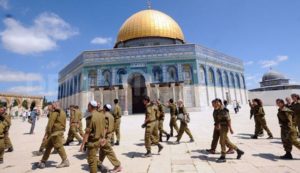 King Mohammed VI of Morocco, in his quality as Chairman of the Al-Quds Committee, sent a letter to the UN Secretary General António Guterres in which he strongly condemned the “unacceptable” Israeli Policies and urged the international community to intervene to compel Israel to put an end to such aggressions.

In the letter, the King expressed to Guterres deep concern regarding the systematic Israeli violations in the City of Al Quds and in Al Aqsa, which has a particular significance for Muslims as the third holy mosque.

He rebuked Israeli continued blatant breach of international law, noting that “regrettably, whenever there appear to be signs of a chance to revive the peace process between the Palestinians and Israel, the latter resorts to fabricating events and fomenting tensions to abort those prospects.”

The King blamed Israel for sapping regional and international efforts for peace in the region through taking a set of serious provocative measures, including staging celebrations and meeting in a tunnel under the Al Aqsa holy mosque and digging new tunnels, passing a bill in the Knesset providing for judaizing education in Arab schools in the occupied Al Quds, annexing settlements in the West Bank and other areas in East Al Quds, adopting the “Unified Jerusalem” bill, which undermines future chances for settling the city’s future and the banning of the Adhan (call to prayer) in Al Quds.

“The Israeli authorities are launching a comprehensive campaign of escalation against the Old City in Al-Quds Al-Sharif and its surroundings by confiscating Palestinian land, by denying Palestinians the right to build and by carrying out arbitrary evictions,” said the Monarch in the letter that was made public on Wednesday.

A yet more serious measure was taken by Israel on Friday July 14 when it prohibited the Friday prayers and closed the Al Aqsa mosque to worshipers for three days while banning the call to prayer, underscored the king, recalling that Israeli authorities went too far in their provocation and proceeded to the introduction of unacceptable security measures through the setting up of surveillance cameras in the mosque and metal detectors in the gates.

“These illegal actions undermine the dignity of the inhabitants of Al Quds and constitute a provocation for all Palestinians,” he said, adding that “they may lead to an outpouring of anger and an overall public reaction that could compound the situation in the Palestinian territories.”

“These provocative actions may incite extremist tendencies that may lead to further tension, animosity and violence in the entire region,” the king went on to say.

“Given this alarming situation, I cannot but strongly condemn these unacceptable Israeli policies in my capacity as Chairman of the Al-Quds Committee. I insist on the need for resolute action on the part of the international community and the influential powers to compel Israel to put an end to those practices, through which it seeks to impose a fait accompli and decide singlehandedly the fate of the City of Jerusalem – an issue, which should be addressed within the context of final status negotiations,” the Sovereign stated.

In this context, he called on the UN Secretary General to “approach the Israeli authorities as soon as possible and compel them to respect the legal and historical status of Al-Quds Al-Sharif and the Holy Places, and to ask them to cancel all illegal measures, including the additional security arrangements, which have prompted suspicion that there might be an Israeli plan for the spatial and temporal division of the Al-Aqsa Mosque.”

On the same occasion, the Monarch highlighted the centrality of Al Quds and its special significance for Muslims stressing the need to safeguard its character and “ time-honored cultural identity.”

He also warned on the risks of turning the issue into a religious conflict, noting that Morocco staunchly advocates peace and considers that imposing the Israeli fait accompli in Al-Quds will exacerbate tension and violence in a region beset by turmoil.