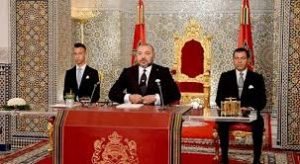 For the second time in less than two years, King Mohammed VI berated the poor management, the inadequate performance and the sluggish service of the Moroccan administration.

In the Throne Day speech broadcast Saturday, the Monarch, in a very critical tone, shed light on the major issues suffered by public administration wherein most civil servants “do not have the skills, qualifications or ambition required; moreover, they are not always guided by a sense of responsibility”.

Some of these civil servants “report to work for only short periods of time, preferring to settle for modest – but guaranteed – pay, instead of working hard to improve their social conditions”, said the Monarch.

“One of the problems which impede Morocco’s progress is the weakness of the civil service, be it in terms of governance, efficiency or the quality of the services provided to citizens”, added the Sovereign.

He cited in the regard the example of the regional investment centers. “With the exception of one or two”, these center “are a problem, said King Mohammed VI, noting these bodies “impede the act of investing instead of serving as a mechanism that provides incentives and resolves the problems of investors at the regional level, without their having to go to central government departments”.

However, the inefficiency of these centers “has an adverse impact on regions that are suffering from insufficient – sometimes inexistent – private investment and from the public sector’s weak performance. This, in turn, affects citizens’ living conditions”, deplored the Sovereign who had called last year for the reform of the public administration.

To put an end to this situation, King Mohammed VI urged governors, caids, directors, staff members, local officials, etc. to work hard, just like staff in the private sector – or even harder. “They should show a sense of responsibility that does credit to the civil service and yields concrete results since these officials are entrusted with serving citizens’ interests”, stressed the Moroccan Sovereign.

In general, Morocco’s development policy choices remain sound. Its progress is crystal-clear and recognized across the board and in all sectors but the problem “lies with mentalities that have not evolved as well as with the inability to implement projects and to innovate”, said King Mohammed VI.

“Today, however, we are witnessing glaring paradoxes that are hard to understand or accept”. On the one hand, “Morocco enjoys indisputable credibility at continental and international levels, the esteem and consideration of our partners and the confidence of major investors, such as the Boeing, Renault and Peugeot groups”.

But on the other hand, “we are shocked by the end results, the facts on the ground and the modest achievements made in certain social sectors, so much so that it is shameful to admit we are actually talking about present-day Morocco”, he went on to say.

“While it is true that our action, through a number of sectoral plans – like those relating to agriculture, industry and renewable energy – has been successful, human and local development programs, which have a positive impact on citizens’ living conditions, do us no credit, nor do they match our ambitions”, underlined the Monarch.

In many sectors, “this is mostly due to the inadequacy of joint action, the lack of a national, strategic dimension, inconsistency instead of harmony, disparagement and procrastination instead of entrepreneurship and concrete action”, said King Mohammed VI in review of the public administration.

The Monarch also criticized political parties for failing to uphold their responsibilities. “The evolution witnessed in Morocco in the political domain and in the area of development has not led to the kind of positive reaction you would expect from political parties, leaders and government officials when dealing with the real aspirations and concerns of Moroccans,” he deplored.

The Monarch rebuked the opportunism shown by politicians and officials who “vie for the spotlight to derive benefits from the achievements made, both politically and in terms of media exposure,” and expressed sharp disapproval of their tendency to hide behind the Royal Palace and ascribe everything to it, when matters do not turn out the way they should.

“When results are positive, political parties, politicians and officials vie for the spotlight to derive benefits from the achievements made, both politically and in terms of media exposure”. However, “when matters do not turn out the way they should, they hide behind the Royal Palace and ascribe everything to it”, underlined the Sovereign saying “enough is enough!” and it is high time to implement accountability rules.

King Mohammed VI insisted further that “one may come up with the most efficient development model and the best plans and strategies but, without a change in mentality; without having the best civil servants; without the political parties choosing the best elites that are qualified to run public affairs; without a sense of responsibility and national commitment; one would not be able to offer all Moroccans the free, dignified life one wants them to have”.

“What I am seeking to achieve today, in all regions of the Kingdom, is a new massîra, or march – a march for the achievement of human and social development; a march for equality and social justice for all Moroccans, because such a major endeavor cannot be carried out in one region and not in the others,” the Monarch said.