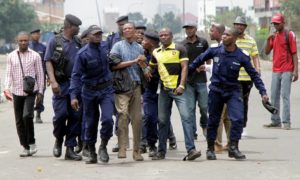 The Southern African Development Community (SADC) will be sending a former head of state to the Democratic Republic of Congo as a special envoy amidst political manoeuvers and a deteriorating economic situation in the Central African nation, the regional bloc said.

Congolese President Joseph Kabila has not yet confirmed or denied whether he will run for a third term. There is also uncertainty over whether the elections, scheduled for December this year, will actually take place.
In his closing address on Sunday after the summit of the region’s heads of state, Jacob Zuma, who assumed the SADC chairmanship urged the DRC’s Independent National Electoral Commission to publicize the revised electoral calendar.

DRC Prime Minister Bruno Tshibila, who attended on Kabila’s behalf, told journalists after the summit the country was “very happy that the SADC heads of state condemned the undue interferences by the countries outside the DRC, especially in view of the sanctions they have imposed on some of the individuals in the DRC in violation of the sovereignty of the country”.
DRC would receive “logistical support” from SADC in organizing the elections, he said.
The country’s Independent National Electoral Commission (CENI) started the voter registration process early this year after the United Nations mission airlifted 3,900 tons of election materials to 15 election centers around the country and distributed to 107 satellite stations.

As a reminder, 8 million people are facing acute hunger in the oil-rich nation due to escalating conflict and displacement in most parts of the country. Chronic malnutrition affects over 7 million children, UNICEF says.