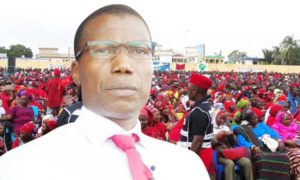 Togolese opposition parties gathered in the Combat for Political Change (CAP 2015) and the Pan-African National Party (PNP) called for “Ghost Towns” this Friday (August 25) across the country to pay tribute to victims of recent protests against the 50-year long ruling dynasty.

About seven protesters were killed and 13 others wounded in Togo last weekend when security forces opened fire to break up demonstrations against the ruling Gnassingbé family.

Twelve gendarmes had also been wounded according to official figures released by the security ministry.

The opposition had planned to embark on a demonstration next week after today’s “Black Friday” to push for an amendment of the Constitution to prevent the continued rule of the Gnassingbé Family in the West African nation.

The government later on Thursday called on the people to ignore the opposition’s call for workers to declare a Black Friday.

“There are a lot of messages around on social media about “Togo mort” (Black Friday) this 25th August 2017 but government wish to remind all citizens of Togo that there’s nothing like Black Friday so the 25th August remains an ordinary day, therefore people can go to work and undertake their normal daily activities,” the government said in a statement .

Also on Thursday, the Ghana Immigration Service (GIS) has cautioned Ghanaians against travelling to Togo on Friday.

According to the GIS, it has picked up intelligence that the opposition in the country is planning a political protest in the capital Lomé and it will be in the best interest of Ghanaians hoping to travel there to hold on.