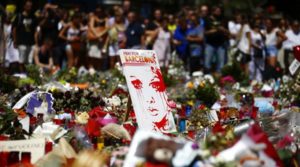 Terror attacks have been recurrent in Europe over the past two years: Paris in November 2015, Brussels in March 2016, and this August 2017, Barcelona and Cambril in Spain, the city of Turku in Finland, the city of Surgut in Russia and again Brussels no later than Friday August 25.

This terrorist violence resulted in some 40 terrorist attacks that cost the life of dozens of Europeans, from different religions and different communities.

It is true that the Syrian and Iraqi conflicts played as a catalyst for this unprecedented terrorist surge that hit Europe, giving ISIS, and to a lesser extent al Qaeda, ground to promote new ideological concepts that consider European Countries as the apostates responsible for all the ills of Muslim societies.

Yet, Europe, with its politicians and societies, is also responsible for the spread of this “global jihadism” thought among certain strata of the Muslim communities, particularly the strong Maghreb communities settled in France, Belgium, Spain, Germany, the Netherlands and Italy.

All the attacks perpetrated in Europe were claimed by the Islamic State terrorist group, which found a breeding ground for new recruits in Europe’s Ghettos, populated by disenfranchised youths, most of them of foreign origin for sure but all of them of European breeding.

These Algerian, Moroccan, or Tunisian youths were brought to Europe by their parents, who were then welcomed with open arms to do the dirty and unsafe work that nobody among the indigenous Europeans really wanted to do, or were born in Europe.

Those who succeeded to graduate despite their belonging to lower social strata, found it very hard to enter the job market. Some had to change their names on their resumés to have a chance to be called for a job interview. The same goes for renting a house, or even have a seat in public transports.

Left with no identity, no prospects for their future, most of these youths found refuge in religion, becoming therefore an easy prey for extremist preachers and terrorist recruiters.

And when terrorism strikes in Europe, rightist media outlets and chauvinistic analysts find it easy to put the blame on the country of origin of the radicalized youth, instead of lambasting Europe’s failed migration policies, the poor functioning of central governments and the weakness of regional authorities, in addition to intelligence failures.

As advised by several analysts, instead of creating amalgams and criticizing Morocco, detractors should rather urge European countries to take Morocco as a model in view of the Kingdom’s successful fight against terrorism.

Actually, Morocco adopted, over a decade ago, a multidimensional approach to address the terrorism phenomenon and took measures to tackle the root causes of extremism, mainly through rehabilitating the religious field and training imams.

Morocco has robust security services and comprehensive counterterrorism strategy that made the country the most insulated against ISIS attacks in the region, underscored the Brussels-based think tank, The International Crisis Group, in an analysis published early August.

“Since the 2003 Casablanca bombings, Morocco has improved its policing and intelligence and, more recently, begun to address its prison radicalization problem,” noted the report.

Given all the efforts made by Morocco to fight terrorism at home and abroad, and given the fact that the young Europeans of Moroccan origin involved in the recent terror attacks in Europe left their native country as toddlers or were born in their parents’ European host countries, Morocco cannot be held responsible for their radicalization. They are rather the product of the society where they grew up.

Now, instead of indulging in baseless accusations on the origins of a terrorism, inherent to Europe, it should be judicious to consolidate the successful dynamic of Europe-Morocco cooperation in the field of security, a cooperation that helped thwart a number of ISIS terrorist attacks.