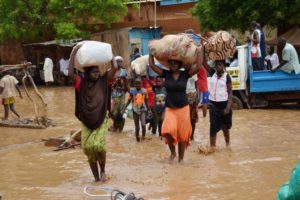 As many villages in Niger have been flooded following the heavy rainfalls recorded in the country lately, Authorities on Sunday urged thousands of residents of the capital city to evacuate homes in the flood zones as more rains are expected in the coming days.

“I am calling on all residents to evacuate the flood zones and immediately leave homes that are close to collapsing,” the governor of the Niamey region, Soumana Ali Zataoua, said.

The floods have already killed 41 people and affected more than 68,000 people since June.

Landlocked-Niger, a very poor country, is often confronted with very devastating floods, which have as a corollary major loss of life and material, often accompanied by epidemics, notably malaria.

In 2016, some 145,000 people suffered from the floods and at least 50 people perished, particularly in the desert regions of Agadez and Tahoua. A year earlier nearly 103,000 people were affected.

In addition to natural disaters, the country is currently under constant threat from al-Qaeda-linked fighters to the north and west, and Boko Haram in the south.