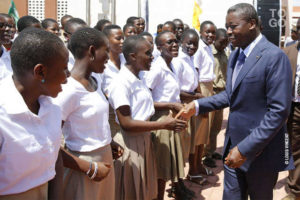 About two million primary and secondary pupils will benefit from a social insurance called ‘School Assur’ in Togo next year, the government said in a statement.

‘This coverage will enable pupils to be adequately cared for and to protect themselves against the financial consequences of illnesses and accidental events that may occur during their academic year,” the government statement said.

The project, which is part of President Faure Gnassingbé’s social policy, will be implemented by two insurance companies: Nsia-Togo and Ogar Assurance.

The project, to be implemented as of September this year, will require 3.5 billion CFA francs.

According to the Minister of Health, Moustafa Mijiyawa, “the project is part of a process of inclusion and development initiated since 2010 by the Togolese government and intended mainly to lift up a large part of the population out of poverty and precariousness.”

Re-elected two years ago, Faure Gnassingbé, who is in power since 2005, has placed his third term under the seal of social well-being and better living conditions of Togolese.

The 50-year old’s 2015 presidential victory was condemned by observers as replete with irregularities and his hold on power has however come under fresh challenge.

Two weeks ago, protesters calling for an end to the Gnassingbe family dynasty, which has ruled the West African nation for five decades, were killed and others were injured by armed forces.