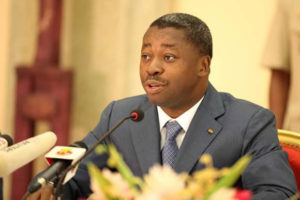 The Togolese Ministers’ Council adopted Tuesday a draft bill seeking to amend articles 52, 59 and 60 of the 1992 Constitution.

The move comes as a coalition of opposition political parties called for demonstrations across the West African tiny nation for institutional and constitutional reforms, and more freedom and democracy in the country.

The opposition is also demanding a return to the constitution of October 14, 1992, a revision of the electoral system and the right for the diaspora to vote.

The state’s apparatus in Togo has remained locked in favor of the ruling party since the enactment of a Constitutional amendment in 2002, which allows the president to serve for more than two consecutive terms.

For the last 50 years, the country has only known two presidents. The current president Faure Gnassingbé was appointed to the presidency by the military in 2005 following the death of his father, who had ruled for 38 years.

Faure Gnassingbé has won two more elections, in 2010 and 2015. Both were decried by the opposition. The country, which is the world’s top five producers of phosphates, depends highly on foreign aid.

If voted by the parliament, the new amendment will limit the presidential term. It will also pave the way for institutional reforms listed in a comprehensive political agreement signed in 2006 between the ruling party and the opposition.