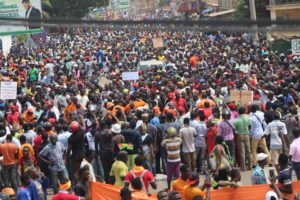 The United Nations Secretary-General Special Representative for West Africa and the Sahel, Dr. Ibn Chambas, arrived in Togo on Thursday as anti-Gnassingbé dynasty protests in the country and abroad, called for President Faure to step down.

Dr. Ibn Chambas first met with the opposition leader and encouraged him “to engage in discussions with the government for constitutional and institutional reforms.”

“Dr. Ibn Chambas, welcomed the adoption by the Council of Ministers of the draft law on constitutional review,” Faure Gnassingbé said on his Twitter handle.

The said law is meant to reintroduce presidential term limits, which was amended to allow Faure continue in power.

On Thursday night, second day of the anti-Gnassingbé protest, security services fired teargas to disperse thousands of protesters in the streets of the capital Lomé.

The two-day protest called for by the opposition parties comes two weeks after a massive demonstration, which resulted in the deaths of at least three with several others injured.

The protesters are calling for the revision of the 1992 Constitution. The opposition want the original two five-year term limit be restored, a two-ballot system, reform of the Constitutional Court and the Electoral Commission.

Togolese authorities have maintained the internet and SMS messaging shutdown in the tiny West African nation.