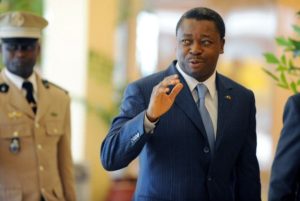 The United Nations envoy to the West African region urged authorities in Togo to respond to people’s “legitimate expectations” as demonstrations in the tiny nation called for President Faure Gnassingbé to step down and end a five decade dynasty that saw his father rule the country for 38 years.

“I remain convinced that all parties want to move forward on the reforms… in order to reach a consensus to respond to the legitimate expectations of the Togolese people,” Mohamed Ibn Chambas, the UN Special Envoy for West Africa and the Sahel, said in a statement released over the weekend.

“Our main perspective is to advise the Togolese to take those actions to prevent an escalation,” he added. “We are in a region where the security challenges are real and menacing and so we don’t want to see any deep political crisis.”

Last week, Police used tear gas to disperse protesters who were burning tires in the opposition strongholds in the capital city Lomé.

At the heart of the protests are calls for the revision of the 1992 Constitution, which was modified in 2002 allowing Faure Gnassingbé to run for an unlimited number of presidential terms.

Faure Gnassingbe has been in power for the last 12 years taking over after the death of his father Eyadema who governed for 38 years.