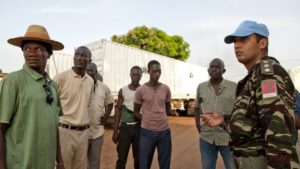 Morocco, in its quality as Chair of the peacebuilding committee, deplored the surge of violence in the Central African Republic and called for boosting the capacities of the MINUSCA, the UN peacekeeping mission in CAR.

“Armed groups cannot hijack the whole political process,” Morocco’s foreign Minister Nasser Bourita said at a high-level meeting on the situation in CAR, held on the sidelines of the 72nd UN General Assembly.

Bourita warned of the risks embedded in the ethnic and religious character of the violence in the region of Bangassou, which was until recently a symbol of tolerance and coexistence in the country.

The international community should immediately intervene in order to avoid the deterioration of the incidents into ethnical cleansing said Bourita, who deemed from a security point of view the current MINUSCA capabilities as inadequate in the face of the spiraling violence and the large swathes of land they have to monitor, coupled with quasi-absent local security forces.

The Moroccan official also seized the occasion to congratulate MINUSCA staff for their tireless efforts in favor of peace and stability in CAR.

He also paid tribute to the fallen MINUSCA peacekeepers, including the members of the Moroccan contingent who lost their lives while performing their lofty duties in defense of vulnerable unarmed citizens.

In this connection, the Minister stressed the need for bringing the perpetrators of the attacks on peacekeepers before justice.

At the regional and continental levels, Bourita commended the countries of the Economic Community of West African States (ECOWAS) for their commitment in favor of peace in CAR.

In the same vein, the Minister raised the alarm concerning the humanitarian situation in CAR where there is an immediate need for increasing humanitarian aid.