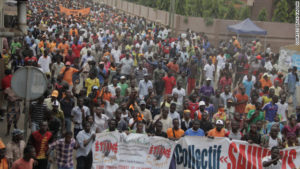 Togo will hold a referendum in the coming months to vote on presidential term limits after parliament on Tuesday failed to vote the amendment of the constitution.

The government bill failed to get sufficient backing (4/5) to become law, as many opposition lawmakers were absent.

Drama Dramani, the speaker of the parliament told lawmakers present during the vote that it is the people who will decide by referendum in the next few days. The move is to reintroduce a presidential two-term limit in the country’s constitution.

It is not clear how the proposed change to article 59 of the constitution would affect incumbent president Faure Gnassingbé, who is now serving a third mandate, which ends in 2020.

Over the past few weeks, hundreds of people have taken to the streets, calling for the resignation of President Faure Gnassingbé.

The most recent protest took place two weeks ago, when riot police fired tear gas at a crowd of people, gathered in the capital, Lome. According to Amnesty International, on September 6 alone, 100,000 people responded to calls to rally.

Numerous opposition sit-ins are scheduled on Wednesday and Thursday in Lomé.