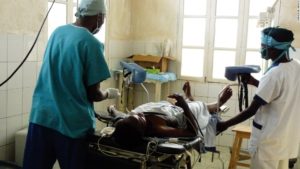 The World Health Organization on Sunday warned that a highly infectious, deadly form of pneumonic plague is spreading rapidly in Madagascar after the outbreak has claimed 21 lives in the Indian Ocean Island.
Pneumonic plague which a severe lung infection is caused by the bacterium Yersinia and transmitted from person to person, has been detected in several cities in Madagascar, the Malagasy government said.
Cases of bubonic, as well as the human transmissible pneumonic plague have been found in the capital Antananarivo and the port cities of Majunga and Toamasina, WHO spokesman, Tarik Jasarevic, said.
So far, 104 cases of plague were reported since the first case has been identified, Jasarevic said.
Plague is endemic to Madagascar resulting in around 400 cases annually. WHO has released $250,000 from its emergency fund to get immediate action underway. It plans to appeal for $1.5 million to fully respond to the needs.
To avoid a further spread of the disease, the Malagasy government has banned meetings and public gatherings in major cities including the capital Antananarivo as part of series of emergency measures.