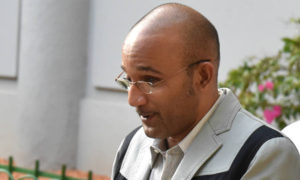 The trial of Michel Gbagbo, the son of former Ivorian President Laurent Gbagbo, accused of broadcasting “fake news” has been postponed on Friday, local media reports.

The 47-year-old was charged in May along with the general manager of influential news portal koaci.com, Laurent Despas, for announcing the disappearance of political prisoners in the country last year.

The Ivorian prosecutor Richard Adou in June dispelled Michel Gbagbo’s claims stating that no cases of disappearance were recorded in the 2011 post-election crisis.

Michel Gbagbo was sentenced on 10 March 2015 to five years’ imprisonment for “assassination of the State.”

Michel Gbagbo, who was a senior lecturer in social psychology at the Felix Houphouet-Boigny University in Abidjan, was later released on bail.

His father, Laurent Gbagbo, ex-leader of the Ivorian Popular Front is now awaiting trial before the International Criminal Court in The Hague for crimes against humanity over atrocities committed in the five-month conflict between 2010 and 2011. He is the first former head of state to have appeared before the International Criminal Court (ICC) and insists he is innocent.

In the 2010 presidential polls, Alassane Ouattara unseated Gbagbo, but the then outgoing president refused to concede defeat, sparking a wave of violence that left around 3,000 people dead.