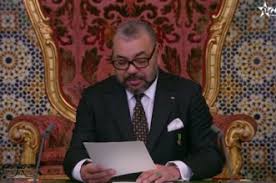 King Mohammed VI has voiced Morocco’s commitment to the new dynamic wanted by the UN Secretary General Antonio Guterres and to cooperate with his personal envoy to reach a final settlement to the Sahara issue, calling on those who created this artificial conflict to shoulder their full responsibility to solve it.
“Morocco remains committed to engaging in the current dynamic wished for by His Excellency Mr. Antonio Guterres, Secretary General of the United Nations Organization, and to collaborating with his Personal Envoy,” King Mohammed VI said in a speech he delivered Monday evening on the occasion of the 42nd anniversary of the Green March, that enabled Morocco to recover peacefully its southern provinces from Spain.

King Mohammed VI made it clear however that, for Morocco to remain committed to this dynamic, it is necessary “to adhere to the related firmly established principles and terms of reference on which the Moroccan position is based.”
The Monarch recalled in this vein that Morocco rejects categorically “any solution to the Sahara question other than within the framework of Morocco’s full sovereignty over its Sahara and the Autonomy Initiative, which has been declared serious and credible by the international community”.

The Monarch also stressed the need to draw lessons from past experience, explaining that “the problem is not so much finding a solution as determining the process that produces it”. “For this reason, all the parties that have concocted this dispute must fully shoulder their responsibility in order for a final solution to be reached,” he said.

Part of the principles on which the Moroccan position is based, the King underlined the need to “ensure full compliance with the terms of reference adopted by the UN Security Council when addressing this artificial regional dispute, for the Security Council is the only international body tasked with overseeing the settlement process”.

The Monarch went on to voice his Kingdom’s “outright rejection of any transgression or attempt to infringe on Morocco’s legitimate rights or its best interests,” and its “rejection of any obsolete proposals designed to divert the settlement process from the set terms of reference, or to introduce or impose other issues which are dealt with by other relevant bodies”.

King Mohammed VI who recalled some landmark events in the liberation process of the Sahara provinces from Spanish dominion, said that Morocco is about to celebrate the 60th anniversary of the speech given by his grandfather, late King Mohammed V, at M’hamid al-Ghizlan.

The historic speech at M’hamid al-Ghizlan “confirmed a basic fact which no one can deny, namely the Moroccanness of the Sahara and the Moroccan people’s unwavering commitment to their land,” the Monarch said, recalling that this speech was delivered (in 1958) immediately after Morocco’s independence and before the Sahara issue was tabled at the United Nations in 1963.

The speech was delivered at a time when no claims had been put forward regarding the liberation of the Sahara, except for Morocco’s legitimate demands and even before Algeria became independent, King Mohammed VI said. He added that his grandfather “reiterated Morocco’s historical and legal rights in respect of the Sahara, when he solemnly and publicly declared to the representatives of the Sahrawi tribal sheikhs, who swore allegiance (bei’a) to him, that he would continue to work to recover the Sahara, in keeping with Morocco’s historical rights and in accordance with the will of the region’s inhabitants”.

Regarding the situation in the Southern provinces, King Mohammed made it clear that “we will not sit by and wait for the desired solution to be found. Instead, we will press ahead with our endeavors to promote development in our southern regions and offer our populations there freedom and dignity”.

In this regard, the Sovereign went on to say, “we shall continue to apply the development model specifically designed for these regions and seek, in parallel, to implement the advanced regionalization plan, which will enable the inhabitants of the region to run their own affairs democratically and to contribute to its development”.

“The projects I have launched, and those to follow, will turn the Moroccan Sahara into an integrated economic hub that will enable the region to play its role as a link between Morocco and countries further down in Africa. It will also serve to connect the countries of the region”, explained the Monarch.

This development model is “not just about the economy. It is an integrated societal project aimed at ensuring human fulfillment, preserving people’s dignity and making sure man is front and center in the development process,” added King Mohammed VI.