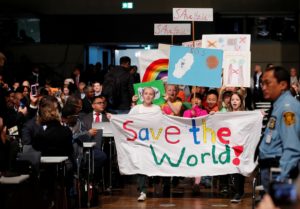 King Mohammed VI of Morocco, who is currently undertaking a Gulf tour, has dispatched his youngest sister Princess Lalla Hasna to represent him at the high-level segment of the 23rd Conference of the Parties to the UN Framework Convention on Climate Change (COP23), held Wednesday in Bonn.

The King, who made of environment protection one of the pillars of his country’s public policies, development strategies and regional or international commitments, was keen to see Morocco represented at a high level, in this case by the Chairwoman of the Mohammed VI Foundation for the Protection of the Environment.

The choice is most judicious as Princess Lalla Hasna is personally involved in environment protection and leads a series of related projects and actions in Morocco and also in Africa all year long.

On Wednesday in Bonn, she attended an informal meeting of heads of state and government that was held under the chairmanship of UN Secretary General Antonio Guterres, and in the afternoon, she took part in the COP23 high-level segment opening ceremony.

Several heads of state made addresses during the ceremony and have all called on the signatory countries of the Paris Agreement to honor their commitments since the Agreement will only stand as a real breakthrough if it is followed by real action.

They stressed the need to grant priority to the preservation of the multilateral consensus reached under the Paris Agreement for substantial reductions in carbon emissions.

Governments, cities and regions from the 152 countries that have ratified the Paris Agreement, must now meet their national climate change commitments (INDC’s) through opting for clean energy, low carbon transport and finance solutions to make this a reality, they pointed out.

The target set by the Paris Agreement, namely keeping the global temperature rise to below 2º C, calls for coordinated international and regional strategies that cannot rely solely on nationally-determined contributions.

Some heads of state seized the opportunity to hail Morocco for its successful organization of the COP22 and for its commitment to preserve the environment at home and to fight climate warming and its related changes primarily in Africa and island countries.

In this connection, President Emmanuel Macron of France paid tribute to Morocco for its unfailing commitment to environment protection and its tireless endeavors to this end at the international level.

The French President, whose country is hosting an international climate summit on December 12, also stressed the need to help the most vulnerable countries to manage the impact of climate change, calling for pooling energies and earmarking funding “to be at the rendezvous of the indispensable environmental transition”.

Morocco also grants special attention to least developed countries and has repeatedly called the international community to abide by the Paris Agreement notably in areas relating to fund-raising and capacity-building. On the other hand, it pledged, through the voice of King Mohammed VI, to make its African partners benefit from its expertise in renewable energies, as it has planned to increase the share of renewable electricity generation to 52% by 2030.

It is to be recalled that during COP22, three commissions were set up under the effective chairmanship of King Mohammed VI. These commissions are to deal with the Sahel, the Congo Basin, and the Island States regions.