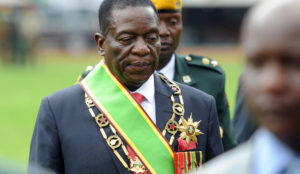 Mnangagwa who abolished several government ministries that performed duplicated roles, has appointed Sibusiso Moyo, the General who appeared on state TV after the recent military takeover, as foreign minister.

The head of Zimbabwe’s air force, Perence Shiri, was named minister of agriculture and land affairs.

‘The Crocodile’ also brought back Patrick Chinamasa as finance minister and many Mugabe loyalists from the ruling ZANU-PF party including leaders of the powerful war veterans’ associa-tion, who pushed for Mugabe’s ouster. Chris Mutsvangwa, who heads the group, is now in charge at the information ministry.

The 75-year-old former spy chief who was fired by Robert Mugabe as vice-president has been sworn in as the third pres-ident of Zimbabwe since the country gained independence in 1980.

Mnangagwa warned that his government would not excuse bureaucratic slothfulness, which is quick to brandish proce-dures as an excuse for stalling service delivery.

Since taking over power, Mnangagwa has introduced a num-ber of measures aimed at cutting government expenditure. He has given criminals who externalised foreign currency and as-sets a 90-day grace period to return the loot or face the “pain of the long arm of the law