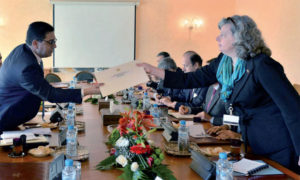 Morocco’s foreign minister Nasser Bourita summoned US chargé d’affair Stephanie Miley in Rabat in a meeting attended by the Ambassadors of the four other permanent UN Security Council members as well as the Ambassador of Palestine.

During this meeting, ordered by King Mohammed VI, in his quality as Chairman of the Al Quds Committee, Bourita expressed Morocco’s rejection of the US decision to recognize Jerusalem as capital of Israel and handed a written message from the Moroccan Monarch to President Trump.

In the message, the King expressed deep concern about the US decision regarding Al Quds (Jerusalem) and rejected any attempt aiming at violating the status of the holy city.

At the same meeting, Bourita informed the ambassadors of the message sent by the King to the UN Secretary General.

In this message, King Mohammed VI warned that “infringement of the internationally recognized legal and historical status of Jerusalem means one runs the risk of hurling the issue into the quagmire of religious and ideological conflict”.

He also warned that such a decision would frustrate international efforts aimed at bringing about an atmosphere conducive to a resumption of peace negotiations and would ultimately lead to increased strife and tension and undermine all opportunities for peace, not to mention fuel violence and extremism.

Bourita called on the permanent members of the Security Council to uphold their full responsibility in preserving the legal status of Al Quds and averting anything that may instigate conflicts or undermine stability in the region.

On the same occasion, the Minister reiterated Morocco’s firm stand in solidarity with the Palestinian people and in support of their legitimate rights, chief among which the right to an independent state with Al Quds as its capital.