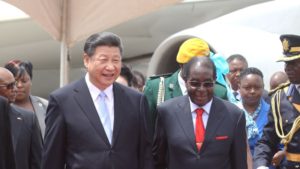 Zimbabwe’s new government has inked a $153 million loan agreement with China on Wednesday to finance expansion and refurbishment of its international airport in Harare as it bids to attract investors and tourists.

The loan for refurbishing the Robert Gabriel Mugabe airport is payable in 20 years with interest rates of 2 percent per year.

Two other agreements worth 400 million yuan ($60.48 million) will finance construction of a new parliament building and expansion of a computing center at the University of Zimbabwe.

China, Africa’s biggest foreign investor, has more at stake in Zimbabwe, and more political influence, than any other state.

This is largely due to its extensive investments in the mining, agriculture, energy and construction sectors.

China was Zimbabwe’s top trade partner in 2015, buying 28% of its exports.

Zimbabwe has not been able to borrow from international lenders since 1999 when it started defaulting on its debt, and has $1.75 billion rand in foreign arears.

The finance minister is scheduled to present the 2018 national budget this Thursday.