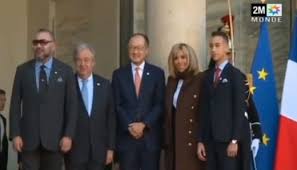 The World Bank and the French Development Agency (AFD) decided to partner with Morocco to implement the Adaptation of African Agriculture Initiative, through a one million Euro Funding.

The Memorandum of Understanding related to this partnership was signed in Paris Tuesday on the sidelines of the One Planet Summit that saw the participation of King Mohammed VI who was accompanied by Crown Prince Moulay El Hassan.

The funding will support Morocco’s climate efforts in Africa, including the Adaptation of African Agriculture Initiative, or Triple A Initiative, launched by the Kingdom during the COP22 summit held in Marrakesh in November 2016.

The One Planet Summit was an opportunity to laud the Moroccan Monarch for his commitment to protect the environment at home and in Africa and to fulfill the global climate agenda.

At the opening of this global event, attended by more than 50 world leaders, the moderator of the session expressed thanks to King Mohammed VI, who, he said, “proved, through his presence in this opening session, his commitment to the climate cause via the organization of the COP22, his leadership for sustainable development in the African continent and his ambitious program for renewable energy development”.

The King of Morocco shows just how the climate issue is universal and involves all countries north and south, said the moderator at the opening session, attended by President Macron, UN Secretary General Antonio Guterres, President of the World Bank Jim Yong Kim, and other Heads of state and delegation.

The moderator also underlined that the presence of Crown Prince Moulay El Hassan in the event is a strong signal of youth’s commitment to defend the future of the planet.

Relatedly, the World Bank Vice-President for Sustainable Development, Laura Tuck, paid tribute to the Monarch and to Morocco for the various initiatives made to gather support for climate action, notably in Africa.
The World Bank official highlighted some landmark projects, spearheaded by the Monarch, such as the Adaptation of African Agriculture Initiative (AAA).

“We are delighted to see Morocco take the lead as part of efforts to implement the Adaptation of African Agriculture Initiative,” Laura Tuck told reporters following talks with a Moroccan ministerial delegation, on the sidelines of One Planet Summit.

The World Bank is taking several innovative measures to improve the management of the agricultural sector with a view to adapting it to climate change and reducing emissions, and in this regards, Morocco can play an important role in this area on the African continent, she said.

Besides the Triple A initiative launched at COP22, Morocco and the World Bank had also agreed to launch the “Green Growth Infrastructure Facility for Africa” tasked to spur green economy on the African continent and pull together environment-friendly private and public investments.

On the sidelines of COP22, Morocco hosted the Africa Action Summit, the first of its kind, during which King Mohammed VI stressed that Morocco makes its expertise in renewable energies available to its African partners.
Morocco, a pioneer country regarding the development of renewable energies, vowed to generate 52% of its energy from renewable sources by 2030 in a move to reduce greenhouse gas emissions.

In a message to the 10th “World Policy Conference” held in November, King Mohammed VI reiterated his commitment to Africa through calling for a “Green Revolution” in the continent.

This “Green Revolution” should be based on a large-scale overhaul of technology and production methods suited to the African context and consistent with the requirements of climate change, underscored the King, who is aware that countering climate change is a means to safeguard the future of young generations, curb calamities such as migration and displacement and promote agriculture and development.

The One Planet Summit was held at the initiative of President Macron on the second anniversary of the 2015 Paris climate agreement that entered into force on November 4, 2016, few days prior to the UN Climate Summit, COP22, held in Marrakech.

The French President had had the idea to hold the summit after Donald Trump announced the US withdrawal from the historic warming pact.